What is Canal Stenosis?

Canal Stenosis is caused by narrowing along the spinal canal which contains the spinal cord. It is the same condition as spinal stenosis.

There are two types of canal stenosis with the first being congenital or developmental stenosis where the canal diameter is too small for the nerve roots and spinal cord.

Acquired stenosis, the second type, is more common and develops through the long-term processes of degeneration of the three-joint complex that consists of the intervertebral disc, the inferior and superior vertebral bodies and the facet joints. With the third decade of development, synovitis, or inflammation of the synovial joints in the spine, can occur. Osteophytes can form narrowing the foramina, root canals and spinal canal. Herniated and slipped discs can also participate in the biomechanical degeneration that also loosens the facet joints, increases spine instability and leads to spinal stenosis(1). The process gets worse. The narrowing not only places pressure on the neural system, but it also impinges the vascular system which results in ischemic neuritis which adds to the symptoms. 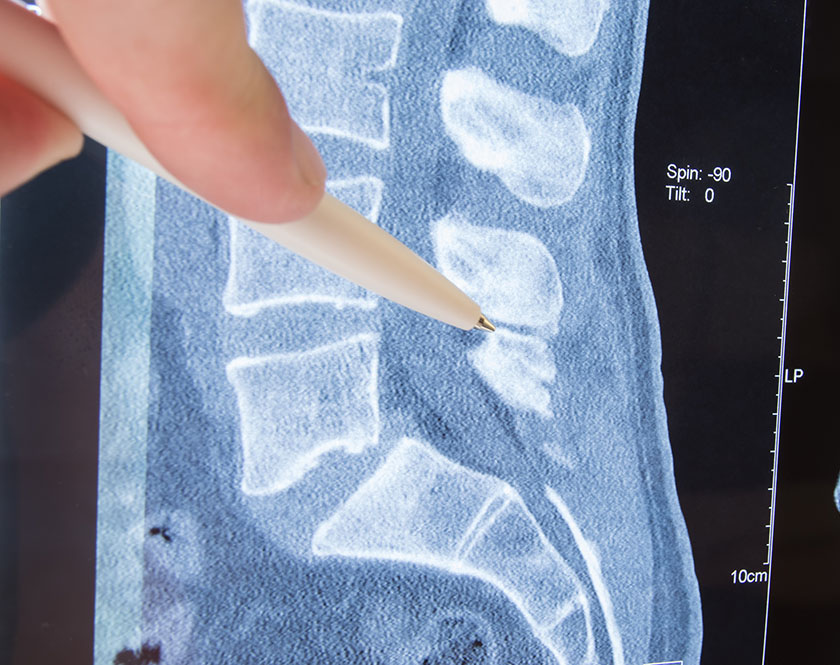 When does canal stenosis usually appear and what are its symptoms?

Canal stenosis is not found in the young. On average it appears after the seventh decade and presents with sudden symptoms of pain in the lower back, buttocks, thighs and calves. Unlike a herniated disc, the radiating pain appears in both legs. Individuals also complain of increased pain in the back and leg with standing or extensive walking. Bladder issues can develop as the condition worsens. During a physical examination, the natural curve of the lower spine may appear to be flattened, and the range of motion in the back is limited.

How is canal stenosis treated?

Like foraminal stenosis, canal stenosis is caused by compressing a nerve. Fortunately, there are conservative, nonsurgical treatments that will naturally decompress the nerve and relieve the insidious pain. Dr. Nourian will develop an opioid-free treatment program that fits your lifestyle. It may include physical therapy, yoga and acupuncture. To reduce pain, he may suggest using a transcutaneous electric nerve stimulator (TENS). For acute pain, he may recommend epidural steroids.

Some patients may not respond to the conservative approach and may require surgery. Perhaps the optimal treatment is foraminal decompression using microsurgery techniques to reduce damage to soft tissue, muscles and bone structures. Some cases with spinal instability may require more intensive surgical solutions such as artificial disc replacement or disc fusions both of which are more invasive(1).

Dr. Nourian has an enviable record of successfully treating the full spectrum of neck and spine problems.

Specialist in treating a wide variety of injuries and conditions that impact bones, joints, ligaments, tendons, muscles and nerves.

What Patients Think About Dr. Nourian

Awesome awesome doctor!!!very nice to all his patient! Dr. Nourian is very kind and caring. A very pleasant man and easy to communicate with. He saw my son when he injured his hip and He took extra good care of him. After 2 wks he was able to resume sports. He’s not only a very good orthopedic surgeon but also an amazing Spine doctor. He always make sure he always gets the job done. 2 Thumbs up to this Doctor!!!??

Dr. Nourian was fantastic! He was able to alleviate my back pain. I would recommend him to anyone

Dr. Nourian is the best. His bedside manner is friendly and professional and his staff is excellent. I went to see him after a terrible whiplash injury when I rear-ended while driving. After receiving my MRI results, the doctor was quick to reach out and went over my options with me. He really cares about his patients.

Dr. Nourian is an outstanding physician. I injured my back while exercising recently. I went to see him, and he explained my injury to me in detail. He told me that my injury would most likely heal without surgery, but if I needed surgery in the future he would get me through it. He is honest, intelligent, and forthcoming. I am thankful for him as my spine physician.

Dr. Nourian was absolutely fantastic. I was struggling with intense lower back pain. He took his time 40 minutes to be exact to see me and review everything with me after another follow up we decided to do surgery. Thank god!!! I’m back to working out, picking up my child, and living my best life. I was so hesitant to do surgery but he was a true god send. He would call me weekly to see how I’m doing.

Dr. Nourian is smart, caring, attentive and super knowledgeable. I highly recommend him as an orthopedic surgeon!

Great with patients and consciences of patient’s time as well as needs. He will spend time to assure the patients with respect to treatment plan and follow-up was amazing with my auntie’s back issues.

An extremely knowledgeable doctor with wonderful bedside manner. He clearly explained every step of the procedure and eased all my worries. My back is feeling great thanks to Doctor Nourian

After seeing three doctors and all of them saying I should operate Dr Nourian was able to address and issue without and surgery. I got an epidural and did physical therapy and I’m able to run around with my grand child. He’s truly a gem. Everyone at the office was friendly and supportive.

Dr. Nurian explained everything very well and preformed the surgery exactly as planned. I woke up pain free and the surgery pain was gone in five days. Could not give him enough praise.